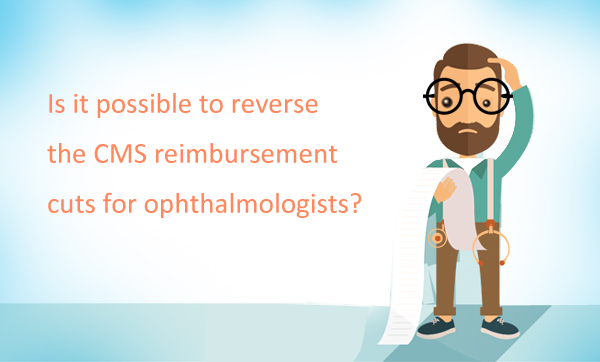 The axe this time has fallen on the wallets of ophthalmologists. Medicare cuts in reimbursements are likely to happen for Glaucoma surgery and retinal detachment surgery followed by other procedures.

Cynthia Mattox, MD, vice president of the American Glaucoma Society (AGS), believes it to be a big impact and tough to reverse.

What are the CPTs for which reimbursements cuts are bound to happen?

What has the CMS decided for retinal detachment repair codes?

Similarly, laser panretinal photocoagulation-CPT code 67228, anticipates for a 68% cut in 2016.The global period has been reduced to 10 days. This would increase the billing of postoperative visits more often.

Though the SGR formula was suspended, there was another twist!

Congress has been successful in suspending the SGR formula every year but did you know there’s a twist very few in the industry know about. A legislation was passed by Congress to cut physician reimbursements, before the suspension of SGR. Do you know about the Achieving a Better Life Experience Act of 2014?

But if CMS fails to achieve this target, it has to reduce the overall physician reimbursements.

So, why does ophthalmology face the axe!

Let’s see the math behind the changes!

How does RUC determine the reimbursement for a procedure?

Some portions of the CPT codes are reviewed every year by the RUC. It calculates how much time, value and cost (which includes the liability insurance) a provider must dedicate to a procedure, based on the practitioners survey. It then assigns number of relative value unit (RVU) to the procedural code. To obtain the amount of reimbursements for a procedure the RVU is multiplied by a conversion factor. The conversion factor till the end of 2015 was $35.9334.

An example with a procedural code: Retinal detachment repair with vitrectomy-67108

In 2015 this code got a reimbursement of $1631 for a doctor. The RVUs for this procedure can be cut by a third by the CMS in 2016, says John Thompson, past president of the American Society of Retina Specialists (ASRS).

These cuts in RVUs for specific procedures didn’t even reach the 1% targeted overall physician reimbursement reduction.  So the conversion factor was cut to $35.8279 for all procedures. And now you know what the sum would be, when there’s a reduction in RVUs and conversion factors both.

How did ophthalmology suffer such high reductions?

Remember we spoke about what the RUC does. It targeted ophthalmology and picked up codes that were never reviewed in years. The survey done by RUC showed that ophthalmologists performed some procedures faster.  One such procedure where the time dropped by 15 minutes, was trabeculectomy. Thus RUC recommended to reduce the RVUs of the code by 7%.

“It’s very unusual for them to cut RUC recommended values as much as they have. “I frankly can’t remember a time when they have cut them by as much as this“, quoted Dr Williams.

This is not the 1st time ophthalmology suffered reductions!

Glaucoma surgeons now have to combine and bill patch grafts and aqueous shunts. This signifies that the combination of the two procedures would result in a steep drop of up to 30%.  Even vitrectomy suffered a reimbursement cut by CMS as of 2015

The diagnostic procedures will have to face the axe. “For 2017, the fact is that optical coherence tomography imaging codes and fundus photography will have new valuations”’, said Dr, Mattox from AGS.

“If the appeal is successful, we could potentially get some of the values increased in 2017,” he says. “It would be very unlikely that we could stop 2016 cuts.” Dr. Thompson from the ASRS and the Retina Society was quoted saying after a meeting with CMS on December 18, 2015. He was one amongst two others working on the appeal against the CMS ruling.

It would be tough to say why exactly ophthalmology had to face reductions. It is just a matter of timing. This specialty codes came up simultaneously as the CMS was mandated to make reductions.  Specialties like cardiology and radiology have faced reductions in past years but even they couldn’t fight back against the cuts.

Is primary care a reason to why specialties are facing reductions?

Since CMS is shifting its focus towards primary care, it has hit the specialty wallet. Now the question is why is the agency so curious about primary care? There could be two reasons.

1st, they are more dedicated towards prevention care and

2nd, they are affordable compared to a specialists.

According to Dr. Robert Field, professor at Dornsife School of Public Health, primary care can carry lot of procedures for which specialties charge more.

Some healthcare experts believe that specialists are in majority in the RUC committee. So it would be easier for them to get better support to increase the cost involved in surgery. When it comes to primary care, it gets challenging to increase the reimbursements for procedures which consumes more time. When it comes to the technical side, the specialists have a bigger hand. They can carry out more procedures in a day and so bill more than the primary care. And it is not possible for a general physician to catch the speed of a specialist. So who gets paid more?

“Finally the differences have gotten so wide and the effects on the healthcare system have gotten so dramatic that something has to give,” says Dr Field.

Yes, we know about chronic care management and transitional care management. These are the two codes CMS had to come up with to allow generalists to claim reimbursements while cutting costs for some specialty procedures.

Is it going to affect patients OR how will the surgeons bill?

Doctors believe that there could be some cut in key procedures but they won’t be ready to put patient care on stake for loosing dollars.  Ophthalmologists believe that since their duty is to provide patients with the care they need, making less money will hardly matter.

Experts are worried about the consequences which could discourage a retina surgeon to carry out retinal detachments in a timely manner. In order to increase their efficiency, specialists could delay the procedures.

The Glaucoma surgeons could prefer hospitals to carry out aqueous shunt procedures. Since hospitals are allowed to bill for supplies so the surgeon would hardly prefer other settings. So this will have CMS pay more for the procedures (aqueous shunts & grafts) combined than it could have paid separately for the two.

If we talk about the long run, some senior surgeons would opt out of the field earlier. And medical students will hardly think of choosing ophthalmology.

What if there is a shortage of glaucoma surgeon? Who will see the severe cases? “Something has to be done OR else they will go blind” Dr Mattox voices her concern.

Are you tracking key metrics?

Here's what you will get: